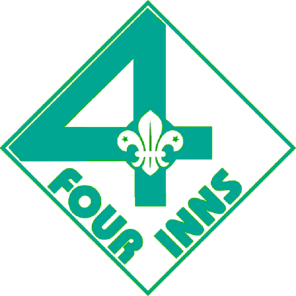 This trophy is a silver cup.

It replaces the original Four Inns Challenge Trophy presented for the first Four Inns Walk by the originators, and original organisers of the event in 1957, the 51st Derby St. Luke’s California Rover Crew.

The Four Inns Cup is presented to the fastest overall team to complete the event.

The trophy depicts a pair of hiking boots positioned either side of a rucsac, mounted on a wooden plinth.

The trophy was given in the memory of Eric Thompson, an entrant in 1959, who was killed in a climbing accident in the winter of 1959/60. It was first presented in 1960 to the fastest team in “fell walking clothes” – which then meant boots and anorak.

Donated in memory of Kim Gale, former county commissioner for Derbyshire, an enthusiastic supporter of the Four Inns.

This is the Scout novice trophy and is awarded to the fastest Scout team none of whose members have ever walked in the competition before.

The trophy is a hexagonal plinth supporting a circular disc containing a Scout badge, the complete trophy being carved in wood.

George Keeling was a member of the 51st Derby Rover Crew who was killed in a caving accident in 1961.

The trophy is a thumbstick.

Freda Thompson was, for many years, involved with the catering at the Start and Fnish as a member of the Women’s Royal Voluntary Service in Buxton. On retiring from the service she presented the trophy to prolong her association with the Four Inns.

The trophy was first presented in 1978 to the fastest team whose members were all under 21 on the day of the event. In 1988 the age was reduced to under 20, reflecting membership of the Venture section of the movement. In 2002 the age range was amended to under 25 to reflect membership of the new Scout Network section.

Fastest Scout Team (with all members under 25 years)

This trophy is a silver plate engraved with a diagram of the route.

It was presented by Lt. Cdr. Shuttleworth who, for many years, was the Derbyshire County Commissioner. He took a great interest in the walk and realised the advantages gained by the Scouts of Derbyshire with their local knowledge and easier access to the moors.

On his retirement from the movement he gave the trophy to be presented to the fastest Scout team not based in Derbyshire. First presented in 1981.

Fastest Scout Team from outside Derbyshire

The trophy represents a bird’s eye view of the route and terrain of the Four Inns in painted plaster on a wooden base.

It was presented to Four Inns by Polly Day, the then VSL of the Falcon VSU, Ashbourne in 1984. Polly was keen to encourage female Venture Scouts to participate in the Four Inns.

The trophy is a piece of Derbyshire Gritstone mounted on a circular wooden plinth.

Peter Saunders, one of a group of Battersea Westside Scouters, had the trophy made after many years of entering the Four Inns.

Fastest Team (with all members over 50 years (Open))

Fastest Team (with all members over 40 years (Open))

This trophy was kindly presented to Four Inns in 2000 by our County President, Robert Robinson.

It is a model of two otters on a plinth, this being particularly relevant as our route takes us past the Otter Sanctuary at Slack Hall.


Warning: Invalid argument supplied for foreach() in /share/CACHEDEV1_DATA/Web/derbyshirescouts.org/fourinns/html/PastWinners.php on line 148


Warning: Invalid argument supplied for foreach() in /share/CACHEDEV1_DATA/Web/derbyshirescouts.org/fourinns/html/PastWinners.php on line 172


Warning: Invalid argument supplied for foreach() in /share/CACHEDEV1_DATA/Web/derbyshirescouts.org/fourinns/html/PastWinners.php on line 148


Warning: Invalid argument supplied for foreach() in /share/CACHEDEV1_DATA/Web/derbyshirescouts.org/fourinns/html/PastWinners.php on line 172